The Vitality Five Jazz Band of LONDON.
The most authentic and specialist performers of genuine 1920’s HOT JAZZ and STOMPS.

Formed in 2015 and initially developing out of a series of informal workshop sessions in South London, the Vitality Five are an all-star quintet dedicated to performing and recording authentic 1920s small-group jazz. Specialising in the kind of blistering ‘hot stomps’ inspired by the records of the California Ramblers, Jelly Roll Morton’s Red Hot Peppers and many others, the Five include sensational virtuosi from the UK, USA and Australia. Since their formation they have appeared at festivals and toured across Britain and Europe, performed live on BBC Radio Three and recorded two albums, the second of which has just been released on VEAC Records. 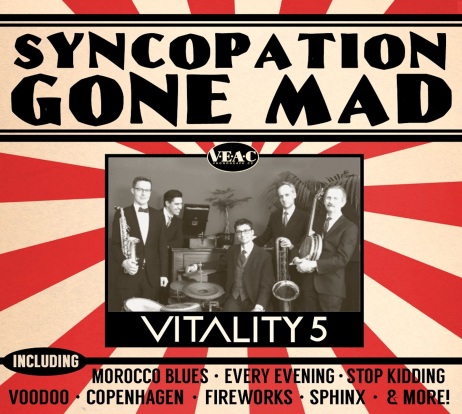 Michael McQuaid is an Australian multi-instrumentalist, regularly performing on clarinet, saxophones, trumpet and even occasionally piano. He has been nominated for Young Australian Jazz Artist Of The Year and lead his own band, McQuaid’s Red Hot Rhythmakers, touring Europe to widespread acclaim, and releasing two albums. In 2015 Michael also toured the world as part of the all-star US/Australian collaboration The Hot Jazz Alliance, and performed with many current greats of the 1920s and 1930s jazz scene including Vince Giordano, Bob Wilber, Andy Schumm and many more.

Born into a musical family, David studied classical clarinet at the Guildhall school of Music and later switched to jazz saxophone. Over the years he has become one of London’s most in-demand reeds players in a multitude of musical contexts including traditional Jazz, mainstream and bebop, modern, free jazz, west-end musicals and others. He is a veteran of film and TV and has appeared on multiple records. Recently he has found himself increasingly in demand playing the clarinet in earlier Jazz styles with all-star British groups including the Chris Barber Band, Pasadena Roof Orchestra and Keith Nichols’ Blue Devils. 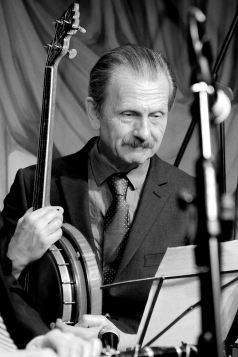 Martin was born in London. He is a very versatile musician having played Folk, Rhythm-and-Blues and Rock ‘n’ Roll as well as most Jazz guitar styles and specializes in banjo music from the Ragtime era to the 1920’s. He plays most stringed instruments, from the ukelele to the bass-guitar. He has toured Europe and America, giving concerts of music from the 20’s and 30’s with both the cabaret band “Rio Trio” and the various famous British vintage jazz ensembles. Martin is a most authentic and tasteful performer of jazz.

Pianist/composer Andrew Oliver performs and composes music across many genre boundaries. He studied in New Orleans before returning to his hometown of Portland, Oregon in 2005 after Hurricane Katrina and since moving to London in 2013, he continues to be involved in a wide range of interesting musical projects. Andrew is a devotee and a master of many genres and styles including modern jazz, West African music, tango and silent film, as well as performing superb vintage jazz and ragtime piano with young London bands such as The Old Hat Jazz Band, The Dime Notes and The Vitality Three. 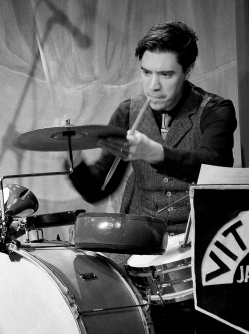 One of the world’s leading exponents of early jazz drumming, the Bristolian’s sense for authenticity and knowledge of period performance practices have already made him the busiest percussionist of the younger generation. He began by leading his own band, Albert Ball’s Flying Aces, and has since gone on to make a career performing exceptional vintage jazz with Alex Mendham and His Orchestra, Richard White’s Fivers and many others. He is also the writer and curator of drumsinthetwenties.com, am online resource about 1920s jazz drums, drumming and drummers.

If you wish to contact the administration of the Vitality Jazz Band, please mail vitalityjazzband@gmail.com or use the contact form below: